Live radio/scores/stats on the SANFL App | Live scores/stats at sanfl.com.au
EAGLES
Woodville-West Torrens will need to make at least three changes for its clash with Sturt on Sunday.
Hamstrung pair James Boyd and Chris Hall were unable to be considered while debutant Jackson Mead accepted a one-match ban for striking from the SANFL Match Review Panel.
Veteran midfielder Scott Lewis headlines the list of possible inclusions, together with former Bulldog Ben Nason who could play his first League game for the Eagles.
Seven players have been named on the extended interchange bench, with four to be trimmed before the bounce.
League
F: Firns, N. Hayes, Rowe
HF: Poole, J. Hayes, Sharrad
C: Goldsworthy, Lewis, Petrenko
HB: Sinor, Von Bertouch, Rowland
B: Westbrook, Thompson, Giuffreda

Should be a good game between two teams hoping to make an impact in September. Eagles need to win to keep their final chances alive. 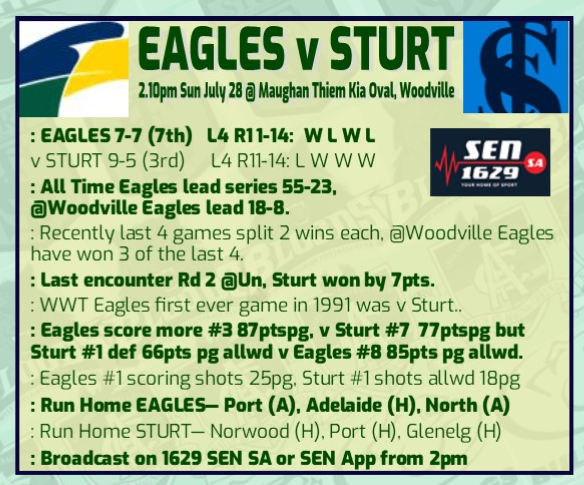 Sturt too good on the day. Eagles long run of featuring in the finals now in real danger of being halted.

UncleHuey wrote:Sturt too good on the day. Eagles long run of featuring in the finals now in real danger of being halted.