NORTH
North Adelaide has included an exciting young defender for his debut against Adelaide on Saturday.
Torrens University SAU18 backman Karl Finlay (18, 192cm and 88kg) will become the Roosters’ latest RAA Rookie after being named at half-back.
Another potential RAA Rookie in Max Lower (21, 185cm and 85kg) has been named on the five-man extended interchange bench with fellow inclusions Keanu Miller and Jake Wohling.
Former captain Mitch Clisby has recovered from a hamstring strain to return to the back pocket.
Premiership forward Keenan Ramsey has reinjured his hamstring while Chris Barns and James Schwarz were sent back to the Reserves.
League
F: Szekely, Harvey, Hender
HF: T. Schwarz, Laurie, Jarman
C: Allmond, Tropiano, Neagle
HB: Minervini, Smith, Finlay
B: Slee, C. Craig, Clisby

Adelaide look too strong with AFL players in the ruck division and across centre. cant see North getting off zero points this week.

If they finish on zero do they have to drop their pants and run around the oval? 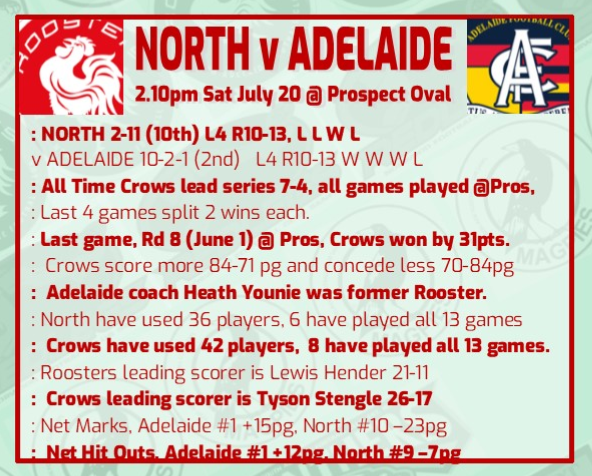 Great win by North, you're off zero. Looked much too good all day for Adelaide

I am not usually given to wishing wither North or the Bays success, but their form from the weekends events provide some hope that the AFL sides are not so unassailable and a premiership to one of the 8 rightful owners of the sanfl is still a realistic eventuality.

September can throw the AFL sides into turmoil with their main sides possibly still in play. That scenario still irks me, but with South and Eagles still in the mix, it is becoming pretty even as the end of the season nears.

If they and Bays, Redlegs and Blues, can direct a few wobblies towards Adelaide and Port, then they may just start to falter at the pointy end of the season.

I'm expecting Adelaide and Port to both weaken come finals time. Players like Ryder and Jacobs (ie, looking for another AFL contract for next season) you'd think are a big chance to pull the pin. Both sides really need their AFL sides to have deep finals campaigns and its hard to see that happening now. Then there's the players looking forward to getting home for off-season holidays, any others with niggly injuries, those likely to be offered up in trades etc. I can't see anyone beating the Bays (the Eagles could have been interesting had they not blown the first half of the season), but Sturt would be the ones to possibly provide the stiffest competition.

Apologies for going well off topic. Great result for the Roosters, expect they'll get over Norwood this weekend too.