PA beat WA with a great last qtr in round 1, then were comprehensively beaten by SA
NA lost to EG in an away game, then accounted for WA easily last week

Hard game to fathom, could go either way
PA are in 5th spot
NA are bottom
This will apply to just about every round, should NA lose, their chances of playing finals diminish because of the -4 points imposition
Because of this  NA would want to gain as much % as possible in every game, in case they finish on equal wins with any other teams

PORT
Port Adelaide will be without its new captain for the encounter against North at Alberton.
Former Fremantle Docker Cam Sutcliffe left the field during the second term against South in Round 2 and has been ruled unfit to face the Roosters.
He has been joined on the sidelines by ruckman Billy Frampton, who accepted a two-match ban from the SANFL Match Review Panel for striking South star Joel Cross.
Four SANFL-contracted Magpies – including former Glenelg key utility Ben Edwards – have been included in the 19-player list, which will still have another four AFL-listed emergencies added.
League
F: Cox, Hill, Edwards
HF: Johnson, Mead, Woodcock
C: Davidson, Atley, Pudney
HB: Frederick, Lienert, Corcoran
B: Garner, McKenzie, Grundy

NORTH
North Adelaide will have its midfield division bolstered for its game against Port on Sunday.
Arguably North’s best player in last year’s premiership win, Tom Schwarz has returned after serving a one-match ban from the SANFL Match Review Panel.
The former Eagle has been named to start in the centre square, which could force the unfortunate omission of his younger brother James, who collected 20 disposals on debut in Round 2.
The Roosters will need to trim one player from their four-man extended interchange bench.
League
F: Thring, Harvey, A. Barns
HF: Hender, Ramsey, Neade
C: Olekalns, Tropiano, Clisby
HB: Castree, Laurie, Allmond
B: Wohling, C. Craig, Spina 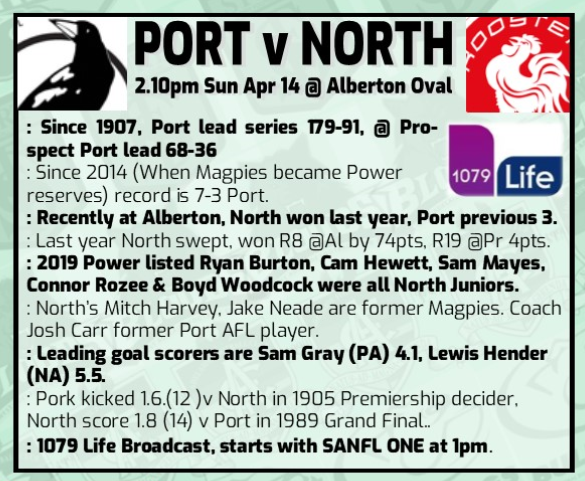 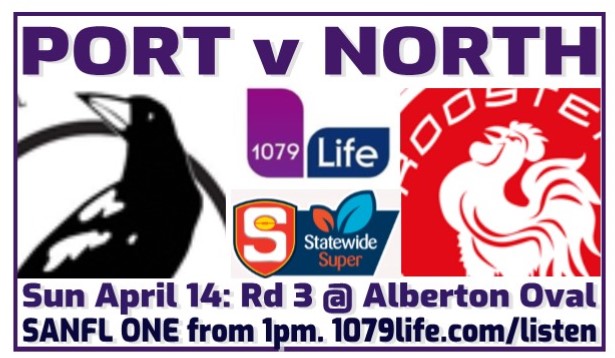