STURT
Injury-ravaged Sturt has called up an RAA Rookie for its contest against North on Saturday.
Athletic forward Mihail Lochowiak (19, 186cm and 86kg) has been named at full forward to play his first Statewide Super League match.
He has been joined in the 23-man squad by defenders Will Coomblas and Rune Gilfoy, goal sneak Jack Penfold and tall utility Hugo Munn.
Experienced backmen Byron Sumner (jaw) and Tom Harms (elbow) will both miss a month of action while Henry Voigt was sent back to the Reserves.
League
F: Greenslade, M. Lochowiak, J. Hone
HF: Battersby, Patullo, Sutcliffe
C: Slimming, Kirkwood, Crocker
HB: Pearce, Stephens, Colquhoun
B: F. Evans, Edmonds, Carey

North not without a chance here. For most of the first half of the game last week they matched the Tigers. It was only really the third quarter where they got smashed. If North can bring a 4 quarter effort they can record a win at home and lift their points total to "not negative". 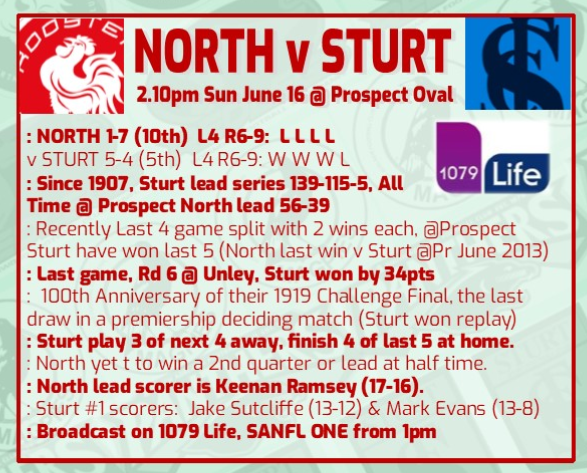