The Mayors cup, hadn’t heard that one before, I thought they played for the “Integrity Cup”

Interesting Mayors cup given recent news.....
Bulldogs tough to beat at home...panthers with a few returning....
Panthers by 2 pts.

If we dont bring the same effort we did against North you will win and win easily.Should be a great contest in ruck Darcy Fort has been excellent for us all year and Brooksby is a gun.Cant see how we will be able to stop Cross & Liddle they are both fantastic players.

Hasn’t Fort been playing well though?

We have room for a second ruckman/forward ,and our form has been average .
Fort has been excellent and we are using Butcher as the backup ruckman.
I'd rather Butcher staying forward with jack supporting fort in the ruck.

Long way to travel but I think South will sneak home by a couple of goals.

Bit hard to get a read on Centrals, when they are good they are very good but they can also be very average, sometimes in the same game. (Says the frustrated Tiger supporter)

It's been a horrible season very similar to the last few yet nothing changes.
I can't see anything different happening today,we'll stuff around with the footy like we do now (too much handball).
Which will lead to turnovers and like most weeks cause easy goals over the back.
Playing at home is no longer an advantage ,this needs to change
I want to see some aggression some heart some pride, and if we don't win then make south hurt.

There use to be a real fear factor for opposing teams coming to Elizabeth and they would see it as a really good win.Now unfortunately Elizabeth is no longer a fear for them we lose far to often at home and our performances havent been good enough. 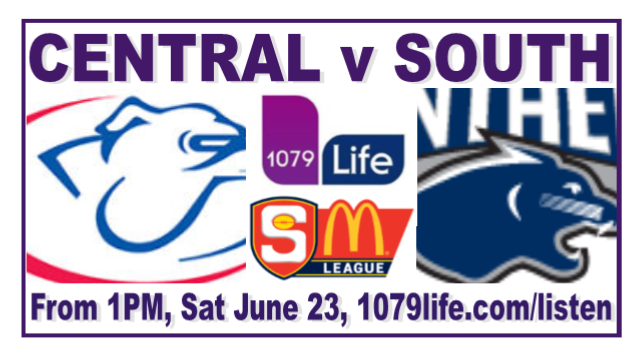 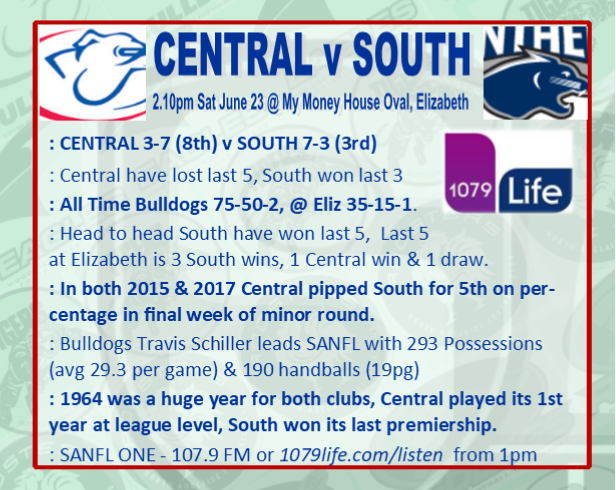 Seriously good win by the boys today against very good opposition.Our pressure was the best we have had for a long time.Jack Hannath as a replacement for Darcy Fort played a great game on a quality ruckman in Brooksby.Great to see Butch kick 6 finally he was able to get a one on one up forward and we gave him a chance.Very good overall team performance

Best effort the team has put in since the Adelaide game. Yes there were periods they didn't perform greatly, but there were more great periods. There was a fight and tenacity in the team that I haven't seen in weeks. We saw the green shoots last week and this week we got the reward.

Now to continue the improvement against Glenelg in a fortnight.
_________________
Only a Cornes could get outraged over that

Really poor performance from the Panthers. Everything to play for and from the first bounce played as though they had won the game when passing through Gepps Cross. Gone were the Crow witches hats from last weeks win against meek opposition, Centrals clearly came to play and deserved their win. Butcher was the most effective forward on the ground (never thought Id see those words together in a sentence) and reaped the rewards from some excellent delivery.
Liddle and Haines were clearly Souths best, Liddle was under perhaps the heaviest tag you've ever seen(he was thrown to the ground 30m off the ball before the first bounce) but still managed 26 possessions, most as usual, quality. He almost snatched a victory for the Panthers in the dying seconds of the match when in the opinion of many he was tripped when charging toward goal 15m out. The umpire, despite putting the whistle to his mouth decided against blowing it. Centrals deserved their win, and now are in a position to drive towards the finals. South have some work to do...namely, find a consistent forward.

A fortnight ago a few on here wanted a new game plan, even a change of coach !!

We actually had Butch one on one up forward and it actually made a world of difference who wouldve thought that giving your key forward some space would make a difference.Very little of the kicking backwards and sideways rubbish only used to switch play yesterday we looked at lot better for it.

that's a smart move, Butcher would out mark all the players in the competition consistently on a one on one basis & has the leg speed & recovery at ground level to make a contest..........thanks for that & i presume you are happier with what you have seen over the last fortnight ?

Yep because we have had a fair dinkum crack. Butchers role is to kick goals bit hard when he is up on the wing and we have no none to kick to.Have said all along this is better than the sideways backwards crap that we have been playing.