Live scores & stats on the SANFL App | Live scores & stats at sanfl.com.au
PORT
Port Adelaide’s Brad Ebert will play his first SANFL match in more than a decade against Norwood on Sunday.
Returning from concussion, Ebert last donned the Magpies’ prison bars in Round 20, 2007 before being drafted later that year by AFL club West Coast.
The star midfielder has been joined by tall forward Billy Frampton (quad), on-baller Joe Atley and ruckman Sam Hayes, who has recovered from Glandular Fever.
Experienced defender Hamish Hartlett is among the players called up for AFL duty, together with Ollie Wines – who had 32 disposals in the SANFL last round – Joel Garner, Peter Ladhams and Willem Drew.
League
F: Cox, Dixon, Woodcock
HF: Marshall, Frampton, Johnson
C: Pudney, Ebert, Mayes
HB: Mead, Hewett, Frederick
B: Elsworthy, Grundy, McKenzie

NORWOOD
Norwood will be without two key premiership players for the clash with Port on Sunday.
Captain Jace Bode (ankle) and utility Ed Smart (hamstring) were both injured in the win against South in Round 9.
Magarey Medallist Mitch Grigg, who suffered from back spasms against the Panthers, has been named to start in the centre square.
Wingman Zac Richards and small forward Chris Olsson have been named on the extended interchange bench with possible RAA Rookie Cam Ball, from Golden Grove FC, and former North Adelaide defender Corey Grove (29, 196cm and 100kg).
Grove, who started his SANFL career with Port Adelaide, could play his first League game since Round 7 2017 with the Roosters.
League
F: Dawe, Shenton, Barry
HF: Hamilton, L. Johnston, Szust
C: A. Wilson, Gerloff, J. Richards
HB: McKenzie, Talia, Forster
B: Bower, Georgiou, Wilkins

Port to win again at Alberton. Too much depth and I can't see the Norwood defence being able to shut down Dixon, Frampton and Marshall.

Be nice to see an Ebert in the prison bar jumper again.

Agree. Norwood are really not playing that well but somehow seem to win the close ones but Ports depth and Norwoods injuries point to an easy Port win unfortunately. Port by 8 goals. 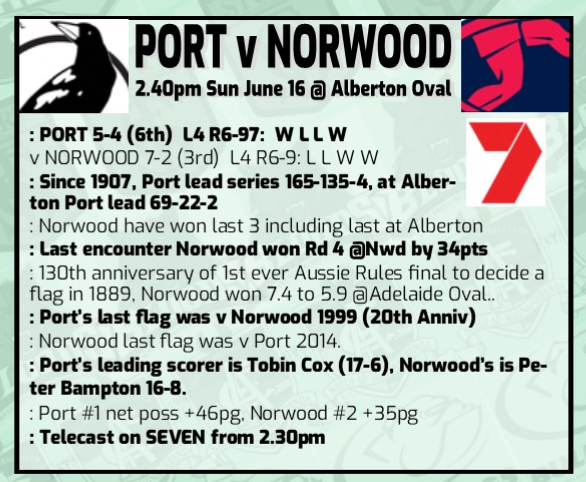 Norwood was with them for three quarters. The superior fitness of a team full of professional athletes told out in the end and inflated the margin.

Unless the AFL teams get some injuries, there is a real possibility of a Port vs Adelaide grand final.

Three things to come out of the game for Norwood.

2. Injuries we do have has forced other players to be given a chance which should help with selections as the season wears on.

3. Fitness of SANFL part timers v full time AFL reserves is a problem which I cant see being rectified.

On another issue, when the AFL reserves competition comes in I cant see ch7 televising SANFL anymore which I guess either means we get another station eg Ch9 who are currently showing Rugby which I dont think would rate anywhere near what SANFL would and pay them a million dollars a year or the SANFL ploughs everything into the Digital pass to build subscription to the point where advertising revenue becomes possible.