Glenelg v Adelaide | ACH Group Stadium | 1:20pm
Live telecast on Channel 7 and the 7plus App
Live scores & stats on the SANFL App | Live scores & stats at sanfl.com.au
GLENELG
Glenelg has named a talented pair of forwards for its top-of-the-table clash with Adelaide on Saturday.
Former Geelong goalsneak Cory Gregson, who was a late withdrawal in Round 14, and hard-working spearhead Josh Scott have been named in the Tigers’ 23-man squad.
Both players have been listed on the Bays’ five-man extended interchange bench which must be trimmed by two before the bounce.
League
F: Bailey, McBean, Close
HF: Scharenberg, Reynolds, Partington
C: Virgin, Snook, Bradley
HB: Joseph, Curran, Motlop
B: Gould, Proud, Uebergang

Tigers to march onward with a close win against Adelaide.

Betts and Greenwood are a plus for Adelaide so it should be a good game.

A first ruck of Jacobs, Gibbs and Poholke probably have a combined salary that is twice Glenelg's salary cap. Not sure why they are playing this at the same time the AFL team is playing, we will get even less Crow supporters then usual. 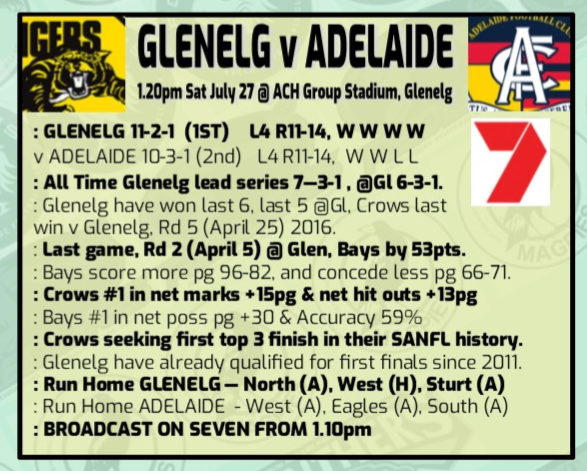 great win by the tiges, keeping the lid on it though

Very enjoyable day at the footy. High standard game in perfect weather with the Bays winning after a tense final quarter.

The Tigers lost another final quarter, this is a trend that is concerning as it has been a problem all year. Understandable when the team is 7 goals up at 3/4 time and just want to cruise home, but with finals approaching the team needs to put together 4 quarters of footy. Definitely something that needs addressing.