ORT
Port Adelaide has been bolstered by the return of a star midfielder for its clash against Glenelg on Sunday.
Former Melbourne captain Jack Trengove, who last played against the Bays in Round 8, has recovered from a leg infection to be named on the wing.
The polished on-baller has been joined in the Mapgies 25-man squad by veteran ruckman Paddy Ryder and Power rookie Kai Pudney.
Former Woodville-West Torrens junior Lachlan Smith and Henley Sharks’ Charlie Morrison are among several SANFL-contracted Magpies added to the extended interchange.
Rebounding defender Matthew Broadbent was fittingly awarded a call up to AFL ranks after 38 disposals last round while key forward Billy Frampton accepted a two-match ban for engaging in rough conduct with Adelaide’s Pat Wilson in Round 13.
Former Tiger Jack Strange couldn’t be considered due to concussion.
League
F: Farrell, Ryder, Hayes
HF: Davidson, Woodcock, Johnson
C: Pudney, Atley, Trengove
HB: Hewett, Frederick, Lienert
B: Garner, McKenzie, Corcoran

Bays to continue their winning ways and get a rare victory at Alberton. No Frampton helps the Bay defence and they are showing the team work to nullify Ryder's influence. The Tigers running brigade lead by Partington, Bradley, Snook and Agnew can match Port's and if allowed clean forward entries Glenelg's marking forwards will prove a handful for the magpie defence. 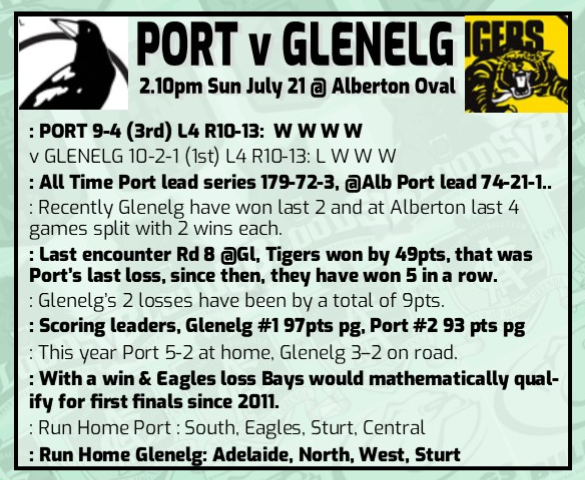 Good win by the Tigers, looked clearly the better side all day. Out ran and out tackled Port, was great team footy all day. Down to none on the bench in the last they still played the game out strongly.

Onward and upward for the Tiger train!