NORWOOD
Norwood has instantly recalled a triple premiership forward for its must-win contest against South on Saturday.
After playing his first Reserves game since Round 18 2009, Dawe has earned his spot back inside attacking 50m for the Redlegs.
Dawe has been joined in the 23-man squad by utility Josh Richards and possible RAA Rookies in 19-year-old Cameron Ball from Golden Grove FC and 19-year-old Sam Buckham from Wudinna.
Josh Richards has recovered from concussion to be listed on the five-man extended interchange bench.
Former Panther Cody Szust was squeezed back to the Reserves after playing both senior matches last week in the wake of Ed Smart hurting his quad in the warm-up of the League game.
Norwood captain Jace Bode, in consultation with coach Jarrod Cotton, has put the team first by opting to play in the Reserves to regain match fitness after feeling underdone in his comeback from a long-term ankle injury last round.
League
F: Taheny, L. Johnston, Gerloff
HF: Bampton, Dawe, Nunn
C: A. Wilson, Panos, Stephens
HB: J. Richards, Talia, Wilkins
B: Hamilton, Georgiou, Shenton

South to cause an upset here and beat Norwood at the parade. Norwood do not look a happy team at present and South have the ability to win tight games by fighting right to the end. The Panthers by a goal. 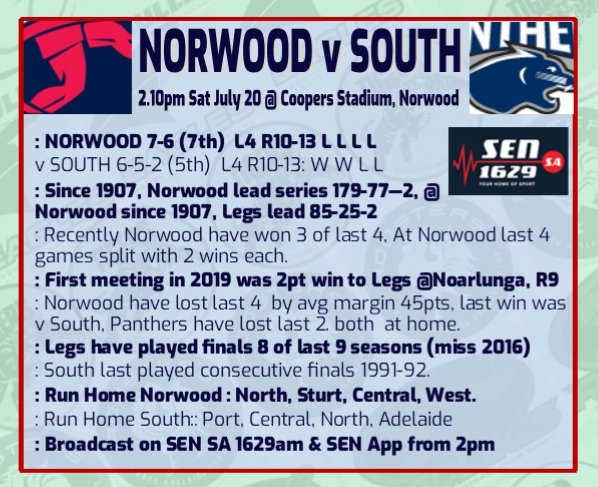 The last quarter was perhaps our worst performance since the Fuller days.
Our list is simply not good enough, losing 3 ruckmen to the AFL since the commencement of the preseason hasnt helped. Our depth is poor. Our reserves are basically a bunch of kids.
Season 2019 now gone- time to drop a few for an attitude adjustment- you can only trust and have faith in your players for so long; throw a few kids in at the deep end and see if they can swim.

Didn't see this coming, Norwood have been looking the wobblier of the two sides going into the match. They smashed South in the last quarter. Makes the battle for the five interesting.