ADELAIDE
Adelaide will be without some creativity in front of goal against Port in Port Pirie on Saturday.
Clever goal sneaks Tyson Stengle (AFL) and Shane McAdam (hamstring) are out of the 23-man squad named to face the Magpies.
Riley Knight has also been called up to the AFL squad while Andrew McPherson couldn’t be considered due to an illness.
Veteran Richard Douglas and emerging Jordan Gallucci have been named as replacements inside the Crows’ attacking 50m arc.
Jordan Boyle and Jy Farrer are among the Development Players listed on the five-man extended interchange bench.
League
F: Hunter, Fogarty, Douglas
HF: Hutchesson, Himmelberg, Gallucci
C: Wright, Wilson, Davis
HB: Sholl, Butts, Latchford
B: Hamill, Otten, Merrett

No idea, depends on who actually plays. Power by not much. 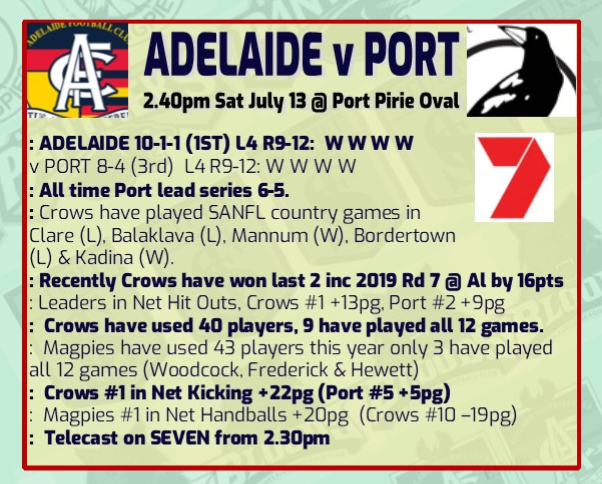