NORWOOD
Norwood has significantly strengthened its line-up to face Adelaide on Sunday.
Jack Oatey Medallist Matt Panos (heel), star midfielder Matt Nunn (hip), key defender Michael Talia (back) and Ed Smart (hamstring) have all overcome injuries to be named in the 25-man squad.
Key position player Luke Surman has been named to start at full forward after kicking 4.2 in the Reserves in Round 11.
Goal sneak Chris Olsson is the only player to be sent back to the Reserves at this stage, with a further four players to be trimmed from the squad before the bounce.
League
F: A. Wilson, Surman, Gerloff
HF: Smart, Dawe, Nunn
C: Hamilton, Panos, L. Johnston
HB: Shenton, Talia, Wilkins
B: Z. Richards, Georgiou, McKenzie

Norwood have the staggers so I expect the Crows to win this one. 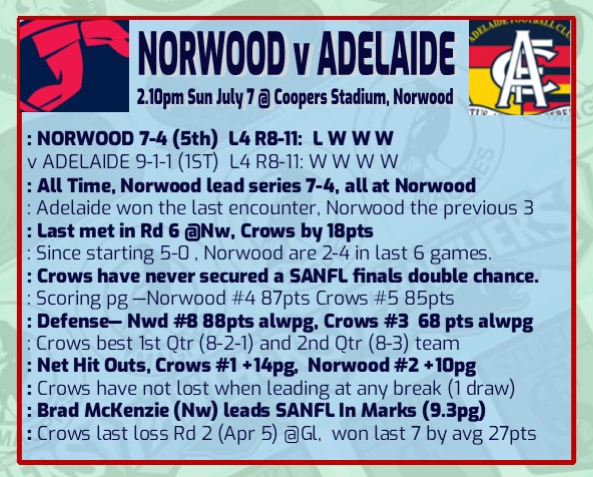