SOUTH
South Adelaide has included two hardened campaigners for its encounter against Glenelg on Sunday.
Former Port Magpie Anthony Biemans (hamstring) has been named in the forward pocket after getting through his comeback match in the Reserves with two goals and 14 disposals last Monday.
Utility Nic Schwarz, who has been out with a hand injury, has been thrust back into the side at half forward despite not playing since the Round 3 draw with the Tigers.
Ruckman Cam McGree, who was a late withdrawal last Monday with a groin ailment, has been named on a five-man extended interchange bench.
Defender Jaidan Kappler has been omitted.
Encounter Bay product Ben Heaslip will play his 50th Statewide Super League match.
League
F: Liddle, Davis, Biemans
HF: Schwarz, Overall, Fitt
C: Sampson, Heaslip, Karpany
HB: Haines, Summerton, Brown
B: Rose, Crabb, Loneragan

Kerrish has done alright in the magoos but I can't see who he will replace unless there is an injury. The Bays are travelling nicely and have got good contributions across the board. Defence is very tight and I can't see the Panthers kicking a big enough score to win. 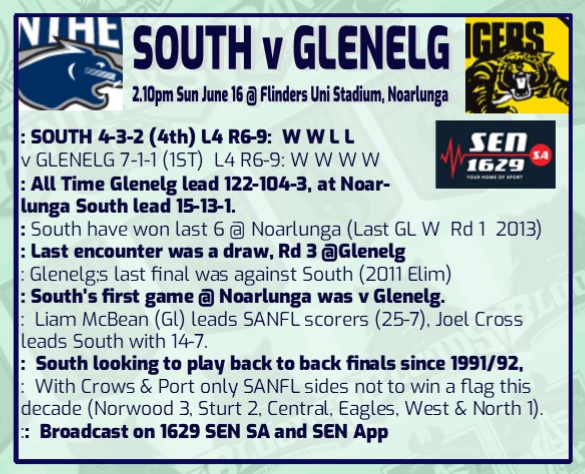 One of the better sanfl games Ive seen in recent times. Open, fast paced in patches and the last quarter was just an arm wrestle with the Panthers scoring the win in a close one for a change.
Caillottos late withdrawal saw young McGree thrown in at the deep end in the ruck and I thought he was very good particularly his second and third efforts. Crabb was good on MR Bean after being beaten early, and Joe haines did a"Leo barry" in the dying seconds after an undisciplined effort by Davis threatened to hand the advantage to the Bays. Cross and Liddle were there brilliant best and I was pleased to Schwartz return to the side who gives us a bit of grunt in the middle.
A really good win by the boys who showed some real character to get away with the win in a really tough game.
Bays look like a good side and they have 3 good tall targets in McBean, Reynolds and Scott who are going to cause headaches for most teams.

Good game in great conditions. Both teams struggled with the opposition pressure but were also able to create some free run when clear. Umpiring was bewildering at times. Glenelg won the ruck and clearances but South looked cleaner when they had the ball. I think we missed Joseph and Agnew's run from defence as getting it clear was often a problem. South also had a greater range of scoring options. The Glenelg talls beat their opponents but unlike recent weeks, got little from the small forwards.

The mark from Haines was brilliant, probably game saving.

An enjoyable afternoon apart from the result.

Despite the different context in it not being a Grand Final, that impressive mark from Jo Haines was very much Leo Barry'esque.

One of the best marks at SANFL level that I have seen in a few years, now.

Very important win in a terrific game of footy. Wasted opportunities in the first term, kicked 11 goals through the middle two quarters before prevailing in a final quarter arm-wrestle.

Davis outstanding (bar a brain fade in the closing minutes), Cross and Liddle busy as always, the smooth moving Karpany starting to prove his value, while Crabby battled hard on McBean. After having his colours lowered through the day, Haines took a brilliant pack mark to quell the Bays' final forward foray.

Just 4 goals kickers for the Bays, Scott and Reynolds in particular proving a handful. Felt as though the Bays dominated the air for most of the day.