GLENELG
Glenelg is poised to receive a boost to its forward structure ahead of its clash with North on Monday.
High-flying Josh Scott has been named on a seven-man extended interchange bench after kicking a goal and having 10 touches in half a Reserves game last Saturday.
His recovery from a broken arm has been speedier than first expected as he looks to play the role vacated by Lachie Hosie, who as selected by North Melbourne in the AFL Mid-Season Draft.
Tom Schott, Matt Uebergang, Jack Yates, Michael Virgin and possible RAA Rookie Darcy LeCornu have also been included in the 25-man squad.
Emerging defender Will Gould has been called upon by the SA U18 team’s match against the SA U20 team at Thebarton Oval on Friday night.
Tough midfielder Matthew Snook will play his 100th Statewide Super League game after making his debut in Round 21 of 2011.
League
F: Reynolds, McBean, Gregson
HF: Close, Sumner, McCarthy
C: Motlop, Snook, Scharenberg
HB: Agnew, Curran, Betterman
B: Joseph, Proud, Chalmers

Congratulations to Matthew Snook on his 100th game. The guy commits 100% to every game and is always throwing his body at the contest and getting the ball out of the pack. Resisted the temptation to go elsewhere when times were tough and deserves all the accolades he gets.

Think the Bays will be too strong for North on what is looking like a wet and windy day at the footy. 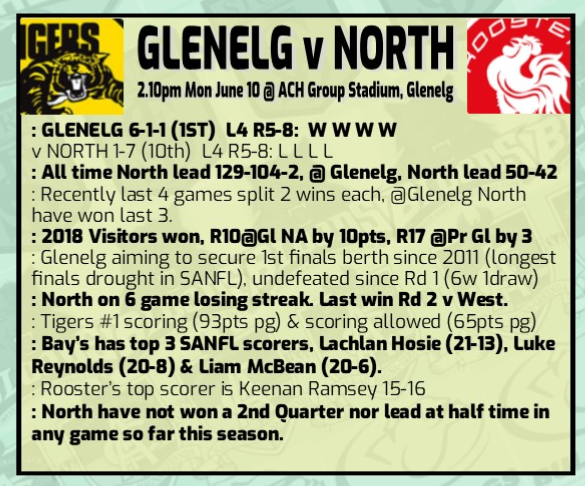 The weather was perfect for footy and from a tigers perspective it was a very enjoyable match. A fairly even contest in the first half as both sides played attacking footy and moved the ball well. The Bays went up a couple of gears in the third and North had no answer. Tiger handball, running and defence overwhelmed North. Last quarter added some respectability to the score but the pressure had gone out of the game.

Bays playing as well as I have seen them in a long run but we seem to rely on one blistering quarter to get the job done. Haven't played a game where we have won all 4 quarters.