SOUTH
South Adelaide has included a hard-tackling midfielder for the match against Norwood on Monday.
Former Magpie Anthony Biemans could play his first League match this season after overcoming a serious hamstring strain.
He has been included in the Panthers’ 24-man squad as one of the six players on the extended interchange bench.
Biemans has been joined in the squad by fellow inclusions Jesse McKinnon and Brett Kennedy.
League
F: Bogle, Overall, Noble
HF: Heaslip, Cailotto, Fitt
C: Sampson, Cross, Karpany
HB: Haines, Summerton, Brown
B: Rose, Crabb, Kappler

NORWOOD
Norwood could welcome back two key players for its contest against South on Monday.
Midfielder Matt Nunn (hip) and tall forward Luke Surman (hamstring) have both been included in the Redlegs’ 25-man squad after recovering from injury.
Former Panther Cody Szust has earned an elevation to face his old side at half-forward while Mac Bower, Chris Olsson and possible RAA Rookie Brodie Carroll have also been listed.
Two certain omissions are talented teenagers Dylan Stephens and Cam Taheny, who have been called upon by the SA U18 team.
Triple premiership bigman Brady Dawe will play his 200th Statewide Super League match after making his debut in Round 2 of 2009.
League
F: Dawe, Shenton, Barry
HF: Hamilton, L. Johnston, Szust
C: A. Wilson, Gerloff, Bode
HB: McKenzie, Talia, Forster
B: Smart, Georgiou, Wilkins 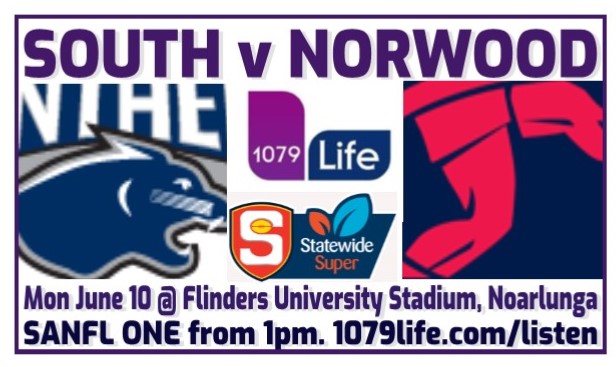 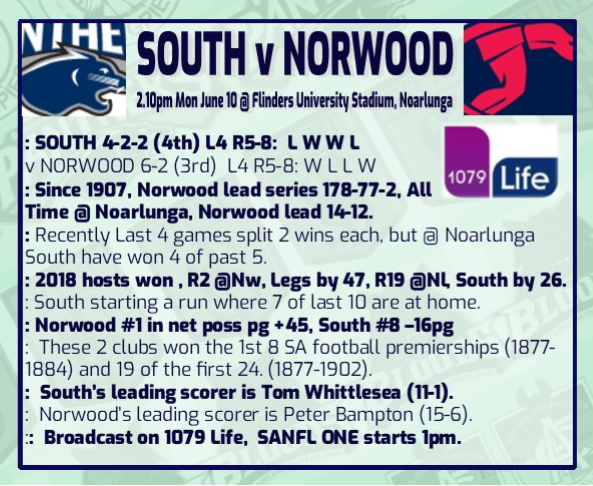 Entertaining game with plenty of momentum shifts. South should/could have been further than 15 points ahead at half time, negating the breeze in the first term before dominating the second. The Legs slammed on 7 goals in the third, converting opportunities from outside 50 and around stoppages. The lead got out to as many as 26 in the final quarter, but a goal to Heaslip at the 26 min mark reduced the margin to 2 points. South continued to press hard, but McKenzie took a couple of pack marks to see the Legs hold on.

Liked the games of Cross (33 and 4 goals), Cailotto (smashed in ruck but 31 touches and 12 clearances), Noble, Haines and Karpany.

Outside of Good Friday games, one of the best crowds I've seen at Noarlunga in recent years. Actually had to line up to buy a beer and take a leak..

The story of South's season continues- a mix of good, bad and ugly.

Lastly, well down to hills lad Dawe on his 200th.

Did SA have an opportunity very late in this game to win ?

Scrappy wrote:Did SA have an opportunity very late in this game to win ?

Abe Davis took an intercept mark around 65-70m out in front of the grandstand and on boundary in last seconds. South's runner was sprinting to him just as Davis sent it back into attack. Ball was in air as siren sounded. South coaching box would have been aware of how little time left hence sending runner out. Would have been a huge kick required with distance and angle but with a diminishing breeze behind him, not totally out of question.

That said, without knowing exactly how much time left, Davis did team thing in trying to send them closer to goal.

As previous comments have mentioned - South are a Chamelion...there best is very very good, there worst is atrocious., and you can witness both these character traits at any time during the game. I thought South were clearly the better side until halftime, and yes, should have been further in front at the main break.
South decided to sit and  watch norwood for most of the 3rd quarter when they booted 7 goals and then kicked the first couple of the last quarter as well. South were 30 pts down about 8 mins into the last quarter yet somehow almost snatched the points with a withering final 15 minutes.
Cross is playing the best footy of his career and he virtually almost carried South to victory off his own boot. I thought Caillotto's game was extraordinary...fullstop.
I thought there were also some key umpiring decisions that went against the home side that proved very costly also. I think the debacle at the end of the 1st quarter when Norwood were awarded a goal from a kick that was clearly touched in the goalsquare, was a disgrace. The goal umpire believed it was touched but was over ruled by the field umpire who was unsighted and guessed that it had been...Appalling.