Time for this week's games.

Port had a thumping victory last week and are well and truly back in the race for the flag. If they win this week against an undermanned Fremantle they will snaffle 4th spot and the double chance, which would be a massive boost to their title claims. Huge game this one and I honestly can't pick a winner.

Adelaide are pretty much cooked unfortunately after another heartbreaking loss by under 2 goals last week. They are now relying on other results, the most likely scenario being that they will have to thump the Saints by close to 20 goals to make the 8. So while I think Adelaide will have a convincing win on Sunday arvo, I don't think they'll do enough to make the 8 and it will be another September holiday for the 4th time in 5 years.

Last round always springs a surprise or 2, Adelaide will know beforehand what's happened (Collingwood and Richmond both to win also) and Lenny Hayes final game will see St.Kilda win and win well.

Richmond have won 8 in a row, they deserve to play finals and will.

My money is on West Coast, or Adelaide personally. Don't think either Collingwood or Richmond will win this weekend.

For purely selfish reasons I hope it does come down to the two Sunday games, as I reckon that will provide some great atmosphere on Sunday at the game as the score updates from the GC come through.

Re the Port game, Roo was talking about it on MMM this morning and reckons if Port win this weekend they'll go close to snaffling a GF berth.

His theory was that if they win they finish 4th and play Sydney at ANZ stadium in week 1 of finals. ANZ is not Sydney's favourite ground and Port would fancy their chances. Win that and it's a home Prelim.

Port fans will be keeping a lid on things, but no doubt this scenario is running through their minds....

Port snaffle 4th spot- knock the swans off @ ANZ in a big boilover, whilst the Cats do a number on Hawthorn. Hawthorn and Sydney work their way through to the prelims- Port win against Hawthorn, and the Cats cause the upset of the year by sending the bondi billionaires tumbling out of the title race. The stage is set.

Port scoot out to a 40 point lead at half time of the GF against a tiring cats outfit, flick the switch and lead by 90 at 3 qtr time, and the final siren sounds with port leading by 114 points, but wait- a Chad Wingard mark and goal after the siren gives port a 120 point win- re-writes the record books on their way to a premiership season and deleting the ammunition

In all seriousness: Port are aided no question, with the omission of Fyfe,Barlow,McPharlin and possibly Pavlich. Get our running game happening, and quell the influence of Walters and Ballantyne (*who combined for 6.6 on the weekend and absolutely killed us in R22 2013). Will we be able to overcome their stifling pressure?? It will be a hell of a lot harder than the witches hats we faced friday night- but doable. 8 day v 6 day break will also be a factor of sorts.

As for Adelaide- they should win, and win well Sunday. It will be all too late however. WCE to take 8th spot.

Haha. So not only a premiership, but a 20 goal win in the GF.

You don't ask for much valleys.

Regarding Adelaide, it's worth noting that they had the chance to slam the door shut on both West Coast & Richmond on their home deck in the last month and failed to do so.

Gingernuts wrote:Haha. So not only a premiership, but a 20 goal win in the GF.

You don't ask for much valleys.

Regarding Adelaide, it's worth noting that they had the chance to slam the door shut on both West Coast & Richmond on their home deck in the last month and failed to do so.

Yeah I know Ginge, I unfortunately woke up this morning

Will be interesting to see the results this week and 1st week of finals.

My money is still on a Swans/Hawks GF.

I would prefer Port to make it over the Swans.

Yes, that is how much I hate Sydney now.

In fact, I wouldn't be that fussed if Port won the flag, just because it would be someone different for a change. It's been the same bloody teams at the top for a good 4 or 5 years now.

Of the top 3 sides away, Sydney is my preferred option to be honest.

4 points at the SCG where Buddy played as good as only he can in the final quarter to win the game for Sydney and 26 points in Adelaide while we were in a form slump and they kicked the last two in junk time.

At ANZ, I fancy our chances against the Swans. Hawthorn worry me at the G and I hate Geelong. Hate,Hate,Hate!

I do like our chances against Fremantle this week, no Barlow or Fyfe cuts into their midfield/forward options, they can both play as a marking forward. I also think they wont rick Pavlich. He had quad "tightness" last week and they would be hesitant to risk losing him for the remainder of their campaign.

Adelaide will beat St.Kilda comfortably, the St's will fire early for Lenny Hayes but Adelaide will prevail by 45-55 points.

The problem for Adelaide is West Coast will run all over the Suns in Queensland. The young blokes are done for the year, West Coast know a win gets them a finals berth and talk is Karmichael Hunt will get a farewell game for the Suns. That means they aren't taking it seriously.

Have any boffins worked out a how many more points Adelaide need to win by over St.Kilda than West Coast over Gold Coast?

Booney wrote: Have any boffins worked out a how many more points Adelaide need to win by over St.Kilda than West Coast over Gold Coast?

A bit hard to work out as it hinges on how many points each team kick as well as the margin - but rough estimates are 100 if WC only win by a couple of goals. So very minimal chance really.

I just can't see Adelaide opening up a can of whooparse, they just don't seem to be able to do it at home. Margin like your predicting Booney is about what I'm expecting.

I knew it would depend on the for/against for both sides but had a rough idea there would be a number Adelaide would need to achieve in the event of a WCE win.

Anything more than a 2 or 3 goal win to West Coast and it will be completely beyond us.

Anyway, if Port win and we get in, it will only be a stay of execution for us.

Freo would destroy us next week if that scenario played out.

if Port win i wonder how much it will take out of them both physically & mentally, i actually think Port will win & then have a ''let down'' the following week, Adelaide will win but i don't think it will be as easy as some think, Port by 7 points & Adelaide by 27 points

I like Port to win this week too, albeit it's one of the toughest gigs around.

As for the finals, given teams being around full strength (minus any long term injuries) I'd give Port a chance against any opponent, although think the Hawks would present the biggest obstacle for them, followed by Freo then Sydney.

In order of concern for me, Hawthorn, Adelaide, Sydney, Geelong, Fremantle.

Adelaide because any advantage at AO goes out the window and the final would be 50/50.

This came up on one of the AFC fan forums yesterday and gave me a bit of a chuckle: 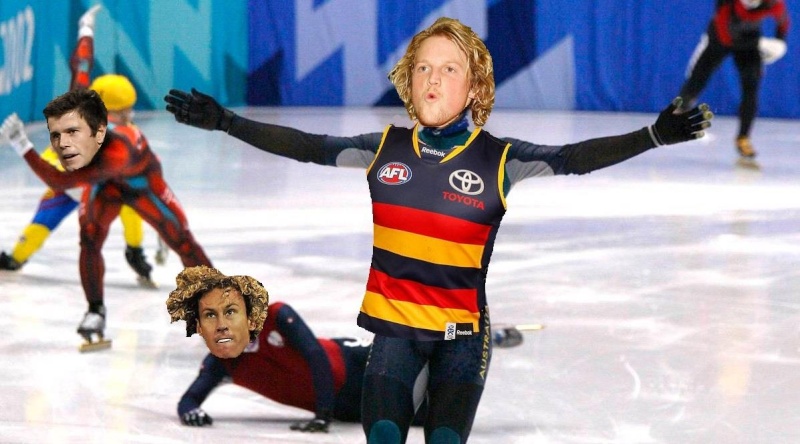 Adelaide because any advantage at AO goes out the window and the final would be 50/50.

You would be fine with Adelaide. Remove them entirely from your list and I think you've got it right.

Nope, any advantage of AO goes out the window and with Adelaide's erratic form, the prospect of them eliminating Port from the finals and keeping their hopes alive for mine, makes that a 50/50 match and one I don't need to see. Thanks.

I think you're scarred by either the previous finals Showdown or the match earlier this year when Port were off the boil. They are MUCH better than the Crows.

I actually think were the match up to happen, Adelaide would be spanked. So personally I don't want it either.

Thats one thing you can't call a Port man

Gingernuts wrote:I actually think were the match up to happen, Adelaide would be spanked. So personally I don't want it either.

I say BRING IT ON

I just have a feeling that if the Crows lose to St Kilda this weekend, Sanderson will not coach the side in 2015, either by jumping or being pushed....