Yep it is, and he either didn't play AFL in his first season or just played the 1 or 2.

IN: Thomas Tarrant
OUT: Wright Daw

Our kicking out from Freo behinds (and they were very inaccurate) last week was shocking. Need to fix that up.

My review of Sydney v Port:

Those were the words of Ken Hinkley post game- and sentiments I share. Don't get me wrong- i'm a realist- we were coming up against our most powerful opposition this season, on their home deck (a ground we have won at only 3 times in our history), on the back of some un-inspiring football from us of late. I was expecting a ripping game, and what a ripping contest it was. I'm an incredibly proud supporter at the minute - but we lost. That is the defining point. Our expectations as a football club need to reflect this attitude too- we can no longer be proud of very honorable performances- we must win at all costs, and if we don't, the playing group must understand why, and learn. A message that Ken is delivering beautifully. A Geelong mentality.

Some numbers, that as a fan i'm not too happy seeing given the result:

These numbers, believe it or not, are all in Port Adelaide's favour.

So where did it go wrong? Skills, and 1%ers. When the game was in the balance in the last quarter, and was a real contest for the best part of the 1st 3, it was Sydney, who not only executed the basics just that fraction better, but it was their work off the footy, that won the game.

1 percenters: 65-45 in favour of Sydney. Forget Buddys overall scoreline. Yep- he single handedly won the game in the last, but look at how he got 2 of his last 3 goals. A brilliant chase down tackle brought about his 3rd goal when Bob decided to zone off for the clearing Pittard kick, and his 5th was a result of a mark outside 50, and the cheekiest, but most efficient block by Nick Smith gave him the 2-3 steps needed to gain enough momentum to bomb from 50. Those 2 moments won the game for mine. That stuff wins you premierships.

Congratulations to the swans- i can't wait for our encounter in 6 weeks time.

Robbie Gray- if I could rate a game 11/10, this would be it. 35 possessions (16 of them contested), 10 clearances, 7-8 score involvements and 3 tackles. I remember saying after the showdown last year (as did Tim Watson), that Chad Wingard after that performance booked himself into the AA side, and I cant help but think Robbie's game had that feel about it. Keep that form up, and not only is he a monty for AA, but an outside chance for the charlie. One must admire his form post knee recon. Remarkable.

Brad Ebert- THAT is the Brad Ebert I got used to seeing early this year. The bloke that oozes leadership, and puts his mates on his back and wills them and himself to contest after contest after contest. 40 touches (18 contested- a game high), 9 clearances, 5 tackles, 8 I50's and a goal. Went away for a bit there, but hopefully that is the return to form for Ebo that hangs around for the remainder of the year. We need big game players- he is becoming a serious cog in our midfield unit.

Jay Schulz- Just about as lionhearted a performance as it gets from Jay. Played on Richards for most of the day and got just reward in 4 goals for effort after effort. Richards had a quality game himself, picking up 4 rebound 50's and 6 1%ers, so it was a great dual to watch unfold.

Matty Broadbent- I thought he took a while to get into the game, and was a bit indecisive with his skills in the first half, but was huge as the rebounding half back in the 2nd half. Finished the game with 24 touches, 4 rebound 50's, 4 inside 50's and helped himself to a goal. Only thing that let him down was poor disposal efficiency (54%), but had a solid day for mine.

Kane Cornes- Loved his defensive game on Hannebery, kept him to 13 touches whilst collecting 18 himself. It was the pure defensive game from Cornes yesterday, and Hannebery was forced a lot of the time into winning contested ball in the Kennedy mould, rather than working his magic outside. 0 I50's and just the 1 goal (courtesy of a dumb free IIRC).

You could throw Wingard, Monfries, White, Boak, Westhoff, Hombsch all in there as honourable mentions. In the end, Sydney's 18-21 just got the better of ports.

I'd expect 2 changes this week against the dogs. Kane Mitchell showed yesterday that no amount of effort and gut running makes up for quality ball use and clear thought process against quality opposition. Turned the footy over far too often, missed some sitter set shots, and that bump on Josh Kennedy which saw Kennedy bounce off, and kick the goal, had me almost throwing the remote at the telly and sending my poor dog running for cover. He and Hammer, who i'd expect to miss with his ankle (seriously, 5 ankles in 4 weeks- what is up with that?), will make way for Polec and hopefully Benny Newton, who picked up another 29 for the pies today.

Im confident we will redeem against the dogs this week (who played mighty well today against the pies i might add), but hopefully Kenny gets the lads up and about for another strong rebound performance, just like round 4 against Brisbane.

Great write up again, valleys. Pretty much agree with all that.

I am just not sure that Pittard is up to afl standard.
I just see so many mistakes, decision errors and clangers.

He is trying no question, but I just don't think Port's defense can keep covering this risk.

Great write up valleys. Didn't get to see a lot of the game as I was making my way into town for the Adelaide game (via a drinking establishment).

I have to say - I really don't like the SCG as a football ground. So small and compact, it really heightens the 'under 12's' feel of 1 pack of players following the ball all day. Doesn't make for a great viewing I don't think.

Gingernuts wrote: I think Adelaide will continue their yo-yo season with an impressive victory. They have their home deck sorted now I reckon and will use it to their advantage. Will post a bit more on this game later.

Had to get one right eventually!

Was a great night out Saturday night. Adelaide's best brand of football is excellent to watch, and I definitely think that they are now starting to use AO's home ground atmosphere to their full advantage.

I would love to give as comprehensive a rundown as valleys did of the Port game, however I don't really remember a lot of it. Had some froffies before the game with my 2 younger brothers to celebrate the birth of brother #2's twins, and things escalated quite quickly with brother #3 after we kicked on at the footy. Recollections of the night are very hazy......

That said, who could forget Eddie's goal from the boundary?? Exceptional stuff and exactly why we got him. Absolutely lit up the crowd, biggest cheer I've heard so far this year.

I also don't have enough good things to say about Brodie Smith. His work has been exceptional off half back this year and he is developing into a fair dinkum player. If they can find a way to combine his run with that of Henderson's off half back as he makes his return form injury, well, what an exciting prospect.

So in summary, a fantastic game but also very frustrating. They need to produce that form every week. It seems to be the same players who are up and then down each week too - Podsiadly, Betts, Brown, Jaensch etc.. If I was Sanderson I would be having a word to them this week.

I have missed something somewhere along the line - I've seen this quote several times now and on Facebook and I have nooooo idea what it means.

Can someone please tell me? ...lol.

Crows game on Saturday night was fantastic, I've said it before, but I love AO - music playing as you enter, and as you leave, the coffee/food carts set up before you cross the bridge - just this most awesome atmosphere. Oh and the added bonus of the crows winning...lol.

It's what Power sounds like when you say it without your teeth in A Mum.

Eddie Betts - Out of bounds.

NOT - take another look Booney - when you see the angle/view the boundary umpire had the ball is still in.

I thought so too Booney, but after seeing a set of stills from the front on view I believe it was in.

Great shots Ginge- the ball has to be completely over the line, so the right call was made in my opinion also. At the time I didnt think so, on the hill with my beer goggles I called out by a metre....although that may have been said to rile some tingle fans

Glad I'm not the only one who had the beer goggles on Saturday night!

I'm not 100% sure that I don't need to apologise to the people around me at the next game. I do know I gave the people leaving early (WTF??? ***** me to tears that does) plenty. Yelling at everyone to BEAT THE TRAFFIC!!! QUICK EVERYONE!! BEAT THE TRAFFIC!! sarcastically at the top of my lungs. I'm not sure if people were laughing with me or at me..... 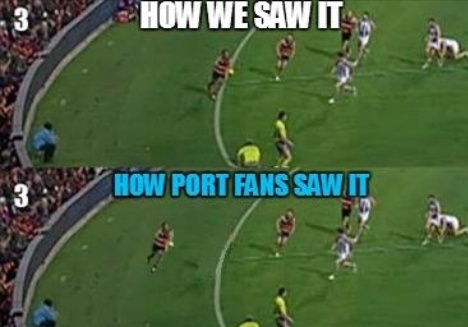 I think it was a bigger call to say it was in as opposed to calling it out.

Well good to know I am not seeing things A Mum, so the 1st shot was photoshopped?

Although the beer goggles call still stands, from the 2nd photo it looks more 10 metres than 1

Should get Wayne Harms in as an independent adjudicator